This guided tour combines the chance to get to know one of Catalonia’s most charming medieval towns and the peculiar world of Salvador Dalí and his Museum, as well as one of the most singular towns on the Costa Brava. The province of Girona harbours a wealth of cultural treasures and without travelling too far there are myriad of interesting sites to visit.

In the morning we will visit the medieval village of Besalú to discover some of its most fascinating places. On the way we will explain its history as the former capital of its own ‘countdom’, its Jewish legacy and visit some of its most interesting buildings.

Then we will head off to Figueres to visit the wonderful Dalí Museum-Theatre. This whole building is a work of art in itself and was conceived and designed by Dalí as a means of creating a bond between those who viewed his work and his unique artistic world. In its rooms there are a selection of some of his most important works, running from some of his first works, through his most daring Surrealist creations, to the works he created in the later years of his life. We will visit some of the most surprising rooms, including the Mae West room and the Sala del Palau del Vent, and we will stop to talk about some of his better-known works such as Galatea de les Esferes, Leda Atòmica, Poesia d’Amèrica, Port Alguer and Galarina. We will also visit the permanent exhibition of Dalí Jewels, which houses a magnificient collection of jewels designed by Dalí himself. All in all, a fascinating look at the life and work of this genius from the region of L’Empordà.

We will have lunch in a restaurant with charm.

In the afternoon we will visit Cadaqués, one of the most beautiful of all the towns along the Costa Brava. We suggest you take the guided tour through the town that many consider to be the true jewel of this coastline, and whose charms seduced artists such as Salvador Dalí, Picasso, Max Ernst, Luis Buñuel and Federico García Lorca. We will walk through the old town and its labyrinth-like maze of backstreets as far as the church of Santa Maria de Cadaqués for a wonderful panoramic view of the town. On the way we will also look at some of the Art Deco buildings that enliven the architecture of the town’s main promenade.

Medieval village of Besalú, Dalí Museum in Figueres and the town of Cadaqués. 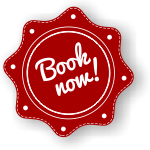